“Most importantly for the designers and manufacturers of speaker drivers, and products incorporating them, APx software now offers the broadest set of methodologies available for detecting rub and buzz defects,” according to the company, explaining: “Rub and buzz is a term commonly used to describe any one of several possible manufacturing defects that cause undesirable noises to be emitted during speaker operation.”

Rub-related noises occur when the speaker cone is off centre or canted, causing moving parts to rub against static parts. Buzz is due to loose particles – chips off the magnet or bits of glue – trapped in the speaker’s gaps. Another fault detected is air leaks – commonly perforations in the speaker surround, unsealed dust caps or gaps in the housing. 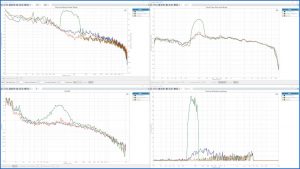 “As an audible defect in a speaker or device incorporating a speaker, rub and buzz presents several challenges to device manufacturers,” said Audio Precision. “First off, it is a subjective issue, with little broad-based agreement on how much is too much. Compounding the issue is the level of distortion in a typical speaker is far greater, and more diverse than in a typical electronic device, and can mask these defects. This latter point means the standard audio measurements of frequency response and distortion will only detect the most severe cases of rub and buzz.”

To counter lack of standardisation, v6.1 includes a number of rub and buzz detection options for users to pick from.

To support the addition of the HOHD and Rub & Buzz Loudness, ‘Fast Sweep signal’ has been added. This is “an extremely fast stepped frequency sweep with no input or output ranging between steps, continuous transition between steps to minimise transient effects, and has a total sweep time that rivals the speed of a logarithmically-swept sine [chirp] signal”, said the company, which claims advantages including: lack of transient ripples at low or high frequencies, the ability to sweep from low-to-high or high-to-low frequency, support for measuring harmonics above the 20th, and precise control of the number of discrete points used in measurements.

“While version 6.1 is officially a minor release, and thus a free upgrade to any analyser licensed for version 6.0, it delivers significant new capabilities, especially for those involved in the design, manufacture, and test of speaker drivers and any product incorporating them,” said Audio Precision general manager Daniel Knighten. “APx audio measurement software now offers the broadest set of rub and  buzz defect detection methodologies available.”

Users can also save all acquired waveforms, impulse responses or cross-correlations to .wav files, and this function can be included as a sequence step in automated measurements.

Release 6.1 is compatible with all analysers in the APx500 Series

For licencing and upgrade options, see the |Audio Precision website.