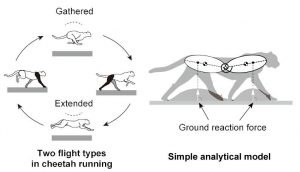 It was already know that cheetahs sprint with a galloping gait and unusually have two extended periods in the cycle when they travel ballistically off the ground – one with fore and hind limbs tucked beneath the body (‘gathered flight’, after forelimb lift-off) and one with limbs stretched out fore and aft (‘extended flight’, after a hind limb lift-off).

“Of these, extended flight is what enables cheetahs to accelerate to high speeds, and it depends on ground reaction forces satisfying specific conditions. In the case of horses, the extended flight is absent,” according to the Nagoya Institute of Technology.

It is also known that considerable spine flexing is involved, with it bent in opposite directions for the two flight periods.

However, “Due to such complex and hybrid dynamics, observations can only get us so far in unravelling the mechanisms underlying the running dynamics of animals” said Nagoya researcher Tomoya Kamimura.

Wanting to understand the dynamics, Kamimura and colleagues managed to created a remarkably simple mechanical model based on vertical and spine movement which appears to explain how cheetahs gallop.

The two-dimensional model has ground reaction forces and a ‘cheetah’ built from two rigid bodies hinged and sprung to one another for the spine, and two mass-less bars for the paired front and paired rear legs. From the spine hinge, front and rear parts are symmetrical.

Solving equations of motion for the model produced six possible periodic solutions: two of them including both extended and gathered flight, and four with only one or the other. 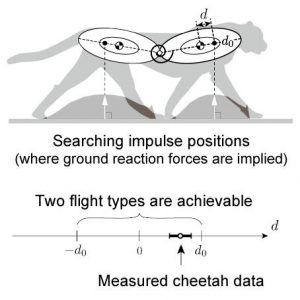 Model solutions yielded two determining criteria for flight type: the position and magnitude of the ground reaction force to the cheetah’s body

Of the two, one of them had fore and hind limb contact in the same order as a real Cheetah, and its dynamics compared well with real-life animal measurements – and one of the discarded four appears to match galloping horses.

“While the mechanism underlying this difference in flight types between animal species still remains unclear, our findings extend the understanding of the dynamic mechanisms underlying high-speed locomotion in cheetahs,” said Kamimura. “Furthermore, they can be applied to the mechanical and control design of legged robots in the future.”

The work is described in ‘Dynamical determinants enabling two different types of flight in cheetah gallop to enhance speed through spine movement‘ in Scientific Reports.

This clearly-written paper is available in full without payment. For the less mathematically inclined, scroll past the middle to ‘Different flight types enable high-speed locomotion’ towards the end, and to the conclusions.